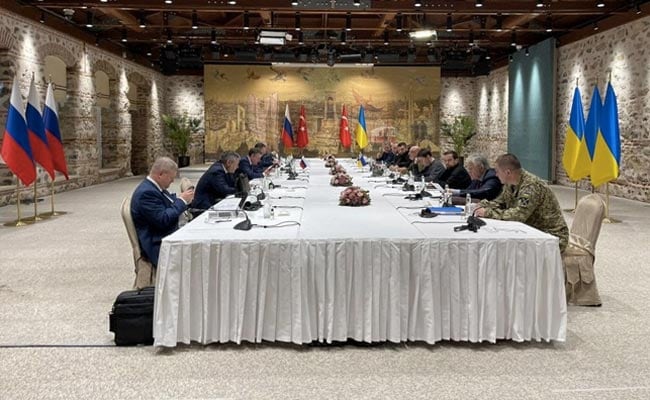 Members of the Ukrainian delegation attend the talks with Russian negotiators.

Ukraine made a series of proposals at talks held Tuesday in Turkey with Russia on resolving the month-long conflict, including abandoning its longstanding ambition to join NATO.

Here is a summary of the major proposals:

“We want an international mechanism of security guarantees where guarantor countries will act in a similar way to NATO’s article number five — and even more firmly,” David Arakhamia, a Ukrainian negotiator, told reporters after talks with the Russian delegation.

Article 5 of the NATO treaty requires member states to come to the aid of other members in case of an attack.

All of those countries except China and Israel are members of NATO.

With such security guarantees Ukraine could become neutral, which in effect means it would drop its aspirations to join NATO.

Moscow had cited the threat of NATO expanding to include Ukraine as one of its reasons for invading the country last month.

With foreign security guarantees in place, Ukraine “won’t host on its territory any foreign military base”, said Chaly.

Nevertheless, military exercises with guarantor states could be held in Ukraine, he added.

Kyiv insisted that the international accord on the country’s security not block Ukraine’s possible membership in the EU.

Ukraine proposes to sidestep the question of Crimea and the breakaway territories in the eastern Donbas region.

In order for the security guarantees to quickly come into force the accord would “temporarily exclude” these areas, said Arakhamia.

For Crimea, which Russia invaded and then annexed in 2014, Kyiv proposes talks over 15 years to resolve its status, according to negotiator Mykhailo Podolyak.