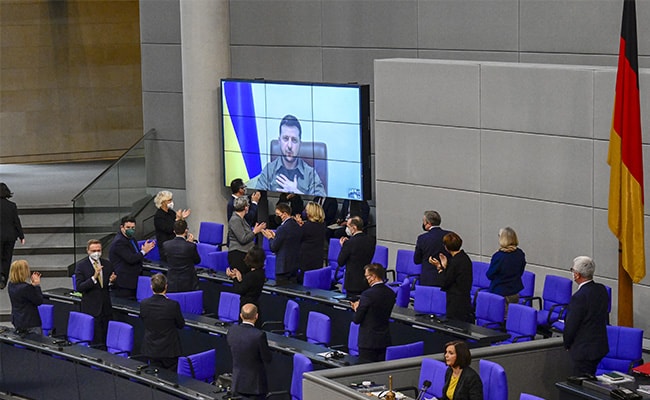 Ukrainian President Volodymyr Zelensky called on Germany in an emotional video address before parliament Thursday to help destroy a new “Wall” Russia was erecting in Europe.

“It’s not a Berlin Wall — it is a Wall in central Europe between freedom and bondage and this Wall is growing bigger with every bomb” dropped on Ukraine, Zelensky told MPs.

Appearing on a screen in his now trademark khaki t-shirt with dark rings under his eyes, Zelensky was welcomed by MPs in the Bundestag lower house with a standing ovation.

In a speech steeped in historical imagery from Germany’s triumph over its Cold War division, Zelensky addressed German Chancellor Olaf Scholz directly with a call for greater solidarity with Ukraine.

“Give Germany the leadership role that you in Germany deserve.”

However he coupled his flattery with a strong rebuke of Berlin’s years-long reluctance to stand up to Moscow and sever its strong energy and business ties with Russia.

“We turned to you,” he said. “We told you that Nord Stream (gas pipelines) was a kind of preparation for the war.”

The Russian invasion of Ukraine on February 24 prompted an overhaul of key planks of Germany’s energy, economic and security policy — some of them dating back to the end of World War II.

It has put the Nord Stream 2 gas pipeline project on ice, joined allies in imposing punishing sanctions on Ukraine and pledged a massive increase in defence spending while dropping a ban on arms exports to conflict zones in order to aid Ukraine.

Germany has also said it aims to be nearly free of Russian oil imports by the end of this year although it still remains heavily dependent on Russian gas.

However Berlin has resisted an outright halt to Russian energy imports, warning it would cause winter shortages and drive inflation, creating potential instability in Europe’s top economy.