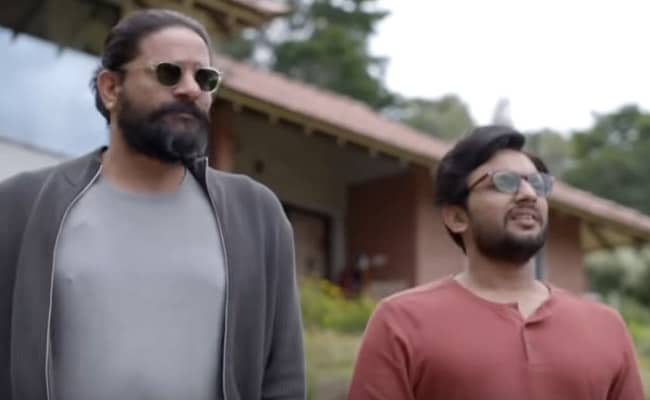 A still from Blood Brothers

Rating: Three stars (Out of 5)

A late-night hit-and-run, the death of an ailing old man and an act of ill-advised concealment send the lives of two temperamentally dissimilar brothers into a tailspin. The duo, the protagonists of Bloody Brothers, struggle to keep their wits about them as they try to hide their deed from the accident victim’s sneaky neighbours and relatives, none of whom, as it turns out, is above board.

A six-part Zee5 series directed by Shaad Ali, Bloody Brothers is a thriller that shuns the usual trappings of the genre. No blowouts, no gunfights, no chases, no heavy-handed confrontations – it thrives on sustained restraint. Its pace isn’t manic. Director of photography Vikash Nowlakha frames the slow crackle in an unflashy manner that does not take the focus away from the people on the screen while creating the requisite visual ambience. The images breathe and create room for continual intrigue.

Violence is conspicuous by its absence in Bloody Brothers. That apart, the series uses expletives only sparingly. One character, in what is clearly a tangential broadside at the usual abundance of swear words in thriller shows, utters the world’s most popular four-letter word by verbalising the first alphabet and completing it with three ‘beeps’, even adding ‘ing’ at the end in one instance.

Visceral thrills aren’t what Bloody Brothers is chasing. An adaptation of a Scottish television series, it is a gently simmering drama about relationships, survival instincts and morality (actually, the lack of it) rather than a tensile tale of pulsating action and violent, unsettling set pieces involving men at loggerheads.

The narrative – the two brothers are on edge all through not only with people around them but also with each other even as the elder one feigns nonchalance – is darkly humorous and, therefore, all the more effective.

The fraternal vibes between them are frequently charged with sarcasm and cynicism from both sides.

Bloody Brothers, produced by Applause Entertainment and BBC Studios India, runs its crooked course in a manner that derives strength from both understatement and ambiguity. The negotiations between the two brothers at the core of the plot have an ebb-and-flow rhythm. The complexities of a case that is difficult to sweep under the carpet are enunciated subtly.

Set in Ooty, which is a picturesque location all right but not necessarily central to the story in the way that the fictional Sironha was to Aranyak or Darjeeling is to Mithya, Bloody Brothers is about men and women with a mean, self-serving streak. Nothing here is what it seems. The tale of culpability, guilt and subterfuge is replete with subtle twists and turns delivered in measured and well-timed doses.

As the show opens, a sloshed Jagjeet ‘Jaggi’ Grover (Ahlawat) and his teetotaler brother Daljeet Grover (Ayyub) are on their way back from a wedding reception. The sober one is at the wheel. Their car hits a man (Asrani in a cameo) on a dark stretch outside a bungalow. The brothers pick up the lifeless body and carry it into the living room and leave it on a chair.

Jaggi and Daljeet have no reason to suspect that there might be an eyewitness to the accident. They believe that can return to their daily lives without anybody in the world coming to know their secret. But they soon realize that their optimism is misplaced.

Jaggi is a married lawyer who has little time for his wife Priya (Sheth). Daljeet runs a bookstore and falls in love with Sophie (Desai), the dead man’s niece who has been bequeathed a large book collection. Priya wants a baby; Daljeet needs a friend. Both have surprises in store.

Tangled equations queer the pitch for the siblings, who have to reckon with a wily woman Sheila (Alagh) who wants her pound of flesh, an alcoholic employee of Jaggi’s, Dushyant (Joshi), and a money-laundering mafia boss Handa (Kaushik) in their desperate attempt to prevent the truth of the fateful night from surfacing.

In the clash that erupts between right and wrong, truth and falsehood, fraternal trust and individual selfishness, greed and power, nobody is entirely safe – or in the clear. Jaggi, decisive and assertive, seems to be in absolute control. But is he? Daljeet, self-effacing and tentative, looks for love and believes he has found it in the form of the winsome Sophie. But aren’t there a whole lot of imponderables that have a way of blindsiding those who trust too easily?

Bloody Brothers is also about three women – one (Priya) in a marriage that isn’t quite working, one (Sophie) forced to run away from a toxic relationship and another (Sheila) who is anything but a helpless old widow who is past her best days. The three actresses who play these characters – Sheth, Desai and Alagh respectively – completely own the parts and make them come alive.

Sophie, like Daljeet, could use some stability in her life. Priya, like Sophie, is seeking emotional succour. And Sheila, like absolutely nobody else, knows exactly what she wants. Together, they keep the two brothers guessing until the very end, when the lies and half-truths crumble and they are forced to go for broke, a situation hastened by the advent of unflappable Handa. Much of the story is already in the past when Bloody Brothers kicks off. The road mishap is the pivotal point – the story unfolds in a ‘before’ and ‘after’ format, with the bulk of the tale panning out over a couple of weeks and a bit following the incident.

Daljeet has been ditched by the woman he loved, Jaggi has extended a major favour to his younger sibling and expects the latter to play the part of a kid brother without asking questions, Priya has had the fact that she does not have a child thrown at her all the time and Sophie has her own story that complicates the jigsaw puzzle of a tale.

Bloody Brothers, written by Siddharth Hirwe, Anuj Rajoria, Riya Poojary and Navnit Singh Raju, is unfailingly watchable, if not dizzyingly exciting, because of Jaideep Ahlawat and Mohammed Zeeshan Ayyub, who are consistently in their elements without having to push themselves too much. Through muted methods, they achieve maximum power.

Satish Kaushik as a criminal mastermind who brooks no opposition steals a bit of their thunder, but the two lead actors deliver performances that are stunning in terms of control and the way they play off against each other. Not once is either of them off the mark in articulating the repercussions of the turmoil within and around them.

The rest of the principal cast – Tina Desai, Shruti Seth, Jitendra Joshi and Maya Alagh – are no less impressive as they flesh out people who do not shy away from giving their unsavoury and scheming (and, in a case or two, the simply adventurous) sides a free rein.

Satish Kaushik plays a crime lord who hisses rather than roars. The veteran actor injects dollops of sly humour into the performance. Jitendra Joshi as the opportunistic gofer fishing in troubled waters is terrific. Tina Desai and Shruti Sheth are both fantastic, leaving one wondering why they aren’t seen more often.

Neither delirious nor demonstrably pacy, Bloody Brothers holds one’s attention all the way thanks its tonal consistency and the quality of the performances .