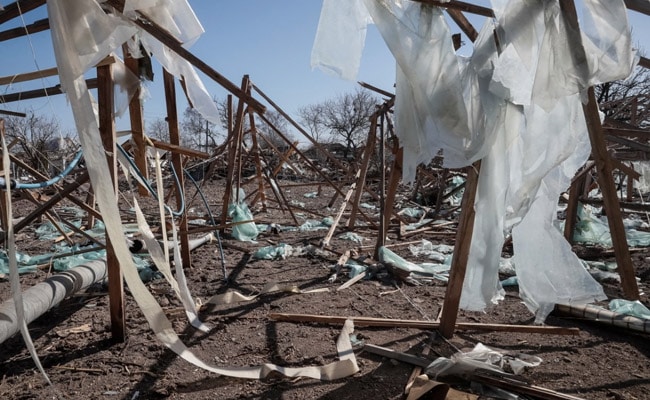 Earlier, Biden had warned of potential Russian cyberattacks on US businesses.

Ukraine’s military said on Tuesday residents should brace for more indiscriminate Russian shelling of critical infrastructure, as U.S. President Joe Biden issued one of his strongest warnings yet that Moscow is considering using chemical weapons.

Russian troops have failed to capture any major Ukrainian city more than four weeks into their invasion, and increasingly are resorting to causing massive destruction to residential areas using air strikes, long-range missiles and artillery.

The southern port of Mariupol has become a focal point of Russia’s assault and lies largely in ruins with bodies lying on the streets, but attacks were also reported to have intensified on the second city Kharkiv on Monday.

Without citing evidence, Biden said Russia’s false accusations that Kyiv had biological and chemical weapons illustrated that President Vladimir Putin was considering using them himself.

Putin’s “back is against the wall and now he’s talking about new false flags he’s setting up including, asserting that we in America have biological as well as chemical weapons in Europe, simply not true,” Biden said at a Business Roundtable event.

“They are also suggesting that Ukraine has biological and chemical weapons in Ukraine. That’s a clear sign he’s considering using both of those.”

The Russian embassy in Washington did not immediately respond to a request for comment.

Biden also told businesses to be alert for possible cyber attacks by Russia. “It’s part of Russia’s playbook,” he said in a statement.

Washington and its allies have previously accused Russia of spreading an unproven claim that Ukraine had a biological weapons programme as a possible prelude to using such weapons itself, but Biden’s remarks on Monday were some of his strongest yet on the subject.

Russia says it does not attack civilians although the devastation wrought on Ukrainian towns such as Mariupol and Kharkiv are reminiscent of previous Russian assaults on cities in Chechnya and Syria.

Putin calls the war, the biggest attack on a European state since World War Two, a “special military operation” to disarm Ukraine and protect it from “Nazis”. The West calls this a false pretext for an unprovoked war of aggression.

Biden is due to travel to Europe this week for meetings with allied leaders to discuss tighter sanctions on Russia, on top of the unprecedented financial penalties already announced. Ahead of the trip he discussed Russia’s “brutal” tactics in a call with European leaders on Monday, the White House said.

But EU foreign ministers on Monday disagreed on whether and how to include energy in sanctions, with Germany saying the bloc was too dependent on Russian oil to declare an embargo.

The conflict has driven almost a quarter of Ukraine’s 44 million people from their homes, and Germany predicted the refugee number could reach as high as 10 million in coming weeks.

Ukraine on Monday rejected a Russian demand to stop defending besieged Mariupol, where hundreds of thousands of civilians are suffering through Russian bombardments laying waste to their city.

A part of Mariupol now held by Russian forces, reached by Reuters on Sunday, was an eerie wasteland. Several bodies lay by the road, wrapped in blankets. Windows were blasted out and walls were charred black. People who came out of basements sat on benches amid the debris, bundled up in coats.

Some, though, have managed to escape. About 8,000 were safely evacuated on Monday through seven humanitarian corridors from towns and cities under fire, including about 3,000 from Mariupol, Ukraine’s deputy prime minister said.

The eastern cities of Kharkiv, Sumy and Chernihiv have also been hard hit.

Among the dead in Kharkiv is Boris Romanchenko, a 96-year-old Holocaust survivor whose flat was shelled by Russian forces last week.

“Please think about how many things he has come through,” Ukrainian President Volodymyr Zelenskiy said late on Monday.

“But (he) was killed by a Russian strike, which hit an ordinary Kharkiv multi-storey building. With each day of this war, it becomes more obvious what denazification means to them.”

On Monday night, a witness in Kharkiv said she saw people on the roofs of apartment buildings dropping grenades or similar ordnance onto the streets.

A second witness, outside the city, reported hearing more intense explosions than on any day since Russian troops began attacking last month.

Reuters could not immediately verify the accounts.

In Kyiv, six bodies were laid on the pavement by a shopping mall struck overnight by Russian shelling. Emergency services combed wreckage to the sound of distant artillery fire.

The governor of Ukraine’s Zaporizhzhia region said buses evacuating civilians from front line areas were hit by shelling on Monday and four children were wounded in separate incidents.

Ukrainian officials hope that Moscow will negotiate a withdrawal. Both sides hinted last week at progress in talks on a formula which would include some kind of “neutrality” for Ukraine, though details were scarce.