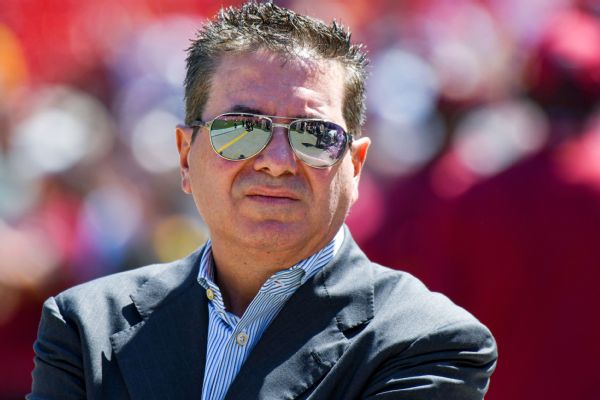 Chairwoman Carolyn Maloney (D-N.Y.) had wanted Snyder to testify under a subpoena as part of their investigation into the franchise’s workplace culture, but Snyder wanted to do so voluntarily and, therefore, not under oath. The Committee eventually agreed to let him do so voluntarily.

Thursday’s deposition, scheduled for 8 a.m., will be private, but the Committee could all or part of the transcript. The deposition is typically conducted by Committee staff members, but other Committee members could participate if they desire.

In a statement, the spokesperson said Snyder has “committed to providing full and complete testimony, and to answer the Committee’s questions about his knowledge of and contributions to the Commanders’ toxic work environment, as well as his efforts to interfere with the NFL’s internal investigation, without hiding behind non-disclosure or other confidentiality agreements.”

The statement also said that if Snyder does not honor his commitments then the Committee is “prepared to compel his testimony on any unanswered questions upon his return to the United States.”

Maloney said in a letter earlier this month to Snyder’s attorney, Karen Patton Seymour, that she did not want Snyder to avoid answering questions by claiming he couldn’t do so because it violated a non-disclosure agreement. Seymour had said in letter to Maloney that such concerns were “baseless.”

Snyder’s testimony comes one day before the House breaks for its August recess. Maloney had issued a subpoena for Snyder, but it was never served. Snyder remains overseas and therefore can’t be served. According to the site vesselfinder.com, Snyder’s yacht is currently docked in the Mediterranean, off the coast of Italy.

Snyder had told the Committee that he did not want to testify before now because he and his family were in Israel commemorating the one-year anniversary of his mother’s death with multiple events over several weeks.

U.S. marshals serve subpoenas on behalf of the committee in the United States but, according a spokesperson, the Marshals Service “has no authority to serve a Congressional subpoena internationally.”

Maloney could have waited for Snyder to return to the United States and served the subpoena at that time. If he then failed to show for his deposition, Congress could have held him in contempt. At that point Snyder could have tried in court to get the subpoena thrown out — a process that could have taken months. If Republicans regain control of the house after the November elections, James Comer, the ranking minority member, said they would no longer pursue this investigation. That means Snyder could have avoided ever testifying under a subpoena or otherwise.

There’s a critical difference between testifying by a subpoena vs. doing so voluntarily.

Many of the employees and former employees who participated in the NFL’s internal investigation of the Commanders’ workplace culture, which resulted in a $10 million fine in July 2021, signed nondisclosure agreements, commonly called NDAs.

Earlier this week, the attorney for more than 40 ex-employees of the organization, said in a statement that they want Snyder waive the NDA for their clients to speak to the Committee. Snyder released them from the NDA to speak with attorney Beth Wilkinson when she investigated the franchise for the NFL. They were also released from them to speak with Mary Jo White, who is investigating for the NFL a new claim of alleged sexual misconduct by Snyder.

“If it is true that Mr. Snyder does not intend to obstruct the ability of witnesses to speak with the Committee, we request that he agree to waive any NDA for that purpose,” attorneys Lisa Banks and Debra Katz wrote. “That would provide much needed comfort to my clients and many other witnesses so that they can speak freely without fear of legal jeopardy.”