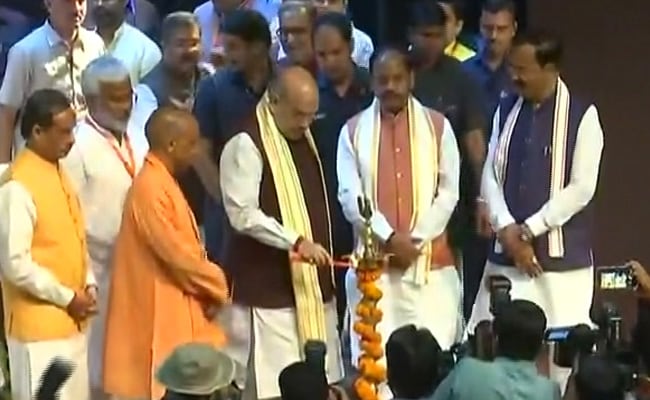 Yogi Adityanath led his party to a thumping victory in the recently concluded assembly elections.

Yogi Adityanath — formally chosen the Chief Minister of Uttar Pradesh by BJP legislators today — reminded his audience that this was the first time a Chief Minister is getting a second straight term in the state. With this election, the BJP also showed that elections can be “fought on nationalism and good governance,” he added.

The BJP won a consecutive term in the recently concluded elections — a record of sorts in nearly 40 years. Pointing to his individual record, Yogi Adityanath said, “The party believed in me in 2017. I was just a normal MP and I had no administrative experience and yet Prime Minister Narendra Modi and the home minister were like guardians to me and told me how to being good governance to UP”.

“One can know some things as a MP but how to govern and administer is something different,” said the Chief Minister, who is also a five-time MP from Gorakhpur.

“One can be an MP in a limited space but to govern a state like UP is a different ballgame and because of the guidance I got we have managed to being good governance to UP,” added the Chief Minister elect, who has been hugely criticized by the opposition in the run-up to the election over his handling of the second wave of Covid and other governance issues.

“The opposition and people who want to destabilise the country were all trying to influence the outcome of this election but with the PM leading the way, we have shown this election could be fought on nationalism and good governance,” he added.

The BJP retained power in Uttar Pradesh by winning 255 out of 403 constituencies, securing a 41.29 per cent vote share.

The oath ceremony of the Chief Minister and his cabinet will be held tomorrow, which will be attended by PM Modi. Preparations are being made for thousands of guests, including senior party leaders, Union ministers and Chief Ministers of BJP-ruled states.

The team of the recently released runaway hit Hindi movie “The Kashmir Files” has also been invited. Actor Anupam Kher and director Vivek Agnihotri are expected to attend.

The ceremony will be held at Bharat Ratna Shri Atal Bihari Vajpayee Ekana Cricket Stadium in Lucknow at 4 pm on March 25.