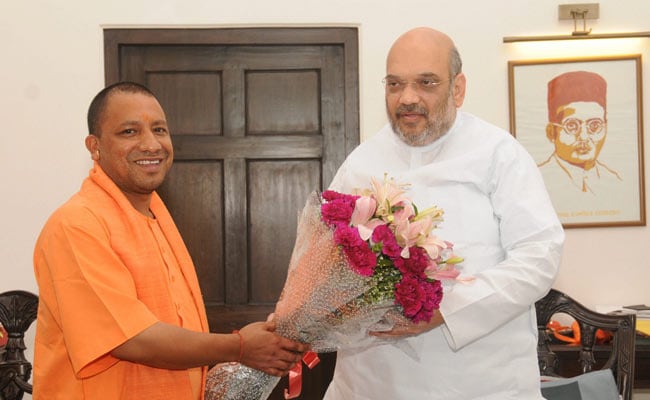 Amit Shah has been appointed BJP’s observer for government formation in UP. (File)

Uttar Pradesh chief minister-elect Yogi Adityanath met Home Minister Amit Shah to discuss the formation of government in the state. The two leaders discussed the ministers that will be sworn in along with Mr Adityanath on March 25, party sources said. The meeting was held late on Wednesday night at the home minister’s residence.

The BJP, which came back to power in the crucial state, is scheduled to elect its legislative party leader on Thursday. It is expected to be attended by Mr Shah, the party’s observer for government formation in UP, and several other senior BJP leaders.

The BJP with its allies won 274 seats out of 403, becoming the first party in over three decades to form a government for a second consecutive time in the state.

BJP is certain to name Mr Adityanath as the Chief Minister of Uttar Pradesh in Thursday’s meet. But the party has not yet taken a call on the names of the deputy chief ministers, sources said. It is still not clear if the incumbents – Keshav Maurya and Dinesh Sharma will continue. Mr Maurya, among the party’s biggest OBC faces in UP, lost the recently-held election, while Mr Sharma did not contest.

The swearing-in ceremony of the Adityanath-led government will be held on Friday in a mega event at the Atal Bihari Vajpayee stadium in Lucknow. BJP sources say close to 40 ministers could also be sworn in. Chief Minister of all BJP rules states and other top politicians from across the country will attend the swearing in ceremony. Prime Minister Narendra Modi will be the chief guest.